I was thrilled when I opened an e mail today from Rachel Wolf and Sarah Laichas from North Light books to say....

"Congratulations! We are very happy to inform you that one of your paintings has been selected for publication in North Light Books' Splash 15: Creative Solutions."

It is an honor to be chosen for such a prestigious book along with so many fabulous watercolour artists.You can see who else has been selected HERE

The painting that has been chosen for publication is the one of my two naughty Ted's 'Intoxiate-Ted and Inebriate-Ted' who found an unopened bottle of whisky in Grandpa's study one day. I sure hope the news of their upcoming fame won't result in more celebrations ;)

The book will be published next year.

Ona's March Tip of the Month!


This months artistic tip is all about Colour!

Understanding how people see and interpret colour can help you to create a feeling of distance and space or create an enclosed claustrophobic feeling in your paintings. It can make objects jump out at you even though they aren’t in the foreground of your painting or areas closer to you in terms of perspective appear less obvious.

It’s time to get technical and impress our artistic friends and families with some scientific words :)

Our eyes have lenses in them. As the light hits our eyes and travels through these lenses, colours with shorter wavelengths of visible light e.g. blue, are bent by our eye's lenses more than colours with longer wavelengths e.g. red. As a result each colour is focused onto a slightly different place on the retinas at the back of our eyes. This is referred to as Chromatic Aberration.

And now here comes another big word to impress people with…

Chromostereopsis is an illusion whereby the impression of depth is perceived in a two dimensional object such as a painting. This illusion of depth is attributed in some way to the process of chromatic aberration that I described above. Although there is no clear scientific theory as to exactly why chromostereopsis works but somehow we  perceive the warmer colours with longer wavelengths as feeling closer than cooler colours with shorter wavelengths.

Even though we dont fully understand exactly how and why it works, chromostereopsis can be a fun word to drop into a conversation… try this one ;)

Partner…. "are you still in the studio? When is it supper time?"


Do let me know if it gets you extra painting  time.

BUT how can we use this illusion in our paintings?

Basically if you paint an object using a colour with a longer wavelength than the colours you have used around it, the object will appear to jump out at the viewer even if it’s further away in the painting in terms of perspective.

Conversely if you use a colour with a comparatively shorter wavelength it will push things back that are actually closer in perspective but that you don’t want people to notice as fast or first.

To illustrate this I want you to look again at the background in the painting I am working on now. I wanted to create a feeling of separation in terms of space and distance in the area that’s actually nearest to Alex. I didn’t want the section of the background to the left of him as you look at it on the screen, or in the bottom section to feel too close to him even though in terms of perspective it is quite close.  I therefore chose an indigo blue as the predominant colour. This helps to push this section further away in our minds. At the same time I also wanted to create the feeling of the binary code coming to us and him from the computerised head in the distance so chose to paint the much warmer compliment orange for a section of the stream of code further away from Alex to help create this effect. So although that part of the binary stream is much further away in perspective distance the change to the warmer orange in this area helps us feel as if it is much closer to us. To some more imaginative souls like me it might even create the feeling as if it’s rushing to us. 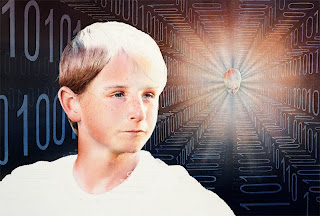 I have taken the above photo and manipulated it in Photoshop so the colours are reversed. See now how close the background nearest to Alex feels to him and how far away that section that was orange and is now blue feels. 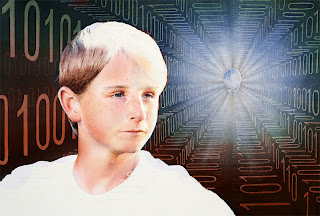 Chromostereopsis is fun isn't it!

Have a play with colours and explore the ‘psychology of Chromostereopsis’ this weekend.

I'm going to be trying to finish this painting :)

Posted by Ona Kingdon at 7:34 PM 6 comments: Links to this post
Email ThisBlogThis!Share to TwitterShare to FacebookShare to Pinterest
Labels: Colour perception in art, creating the illusion of distance, painting, watercolour


What a difference a day can make...The preliminary washes take a long time to do - glaze upon glaze slowly building up the contours of the face and then with just a few final skin tone washes in one afternoon the portrait then comes to life. I still have the eye brows to darken slightly but this is easier to do once I have at least some of the hair painted in so I'm waiting to finish these for the moment. 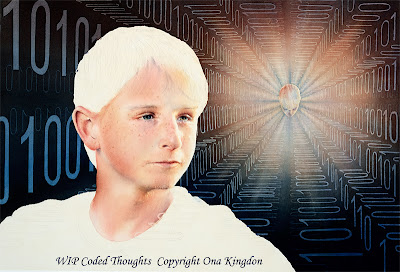 Today I also adjusted the pupil on the left side as you look at the painting on the screen because it was looking a little higher than the eye on the right. Its only a millimetre or two down now but in portraiture every millimetre counts.

Ona
Posted by Ona Kingdon at 4:47 PM 3 comments: Links to this post
Email ThisBlogThis!Share to TwitterShare to FacebookShare to Pinterest

It's been a bit of a draining week but painting gives me something positive to focus on so I've been plodding along with this latest one in between hospital appointments and dealing with UPS blunders.

I'm still forming the facial features on the portrait section of the painting but the personality and likeness is beginning to take shape.  It really is worth taking your time on this stage and making sure you have the likeness when it is still relatively easy to alter. I now need to increase the shadow values on the face and form the neck. Then I'll be ready for the final skin tone washes. The shiny parts are where I have painted on masking fluid to preserve the strongest highlights. 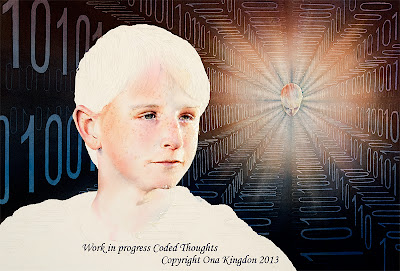 I'm really pleased with the tension that is being caused by the rush of the background  directly towards the viewer but at the same time the subject not looking at the viewer but off into the unknown. To me, this just accentuates that feeling of us being aware of but not understanding the thoughts. Hope you all feel that it works too.

Ona
Posted by Ona Kingdon at 5:37 PM 3 comments: Links to this post
Email ThisBlogThis!Share to TwitterShare to FacebookShare to Pinterest

Backgrounds can do so much to add atmosphere to a painting not only with the use of colour and value but also subject matter. This has been a very complicated background to paint with lots of masking and many many layers of glazing needed to create the effect that I was after. 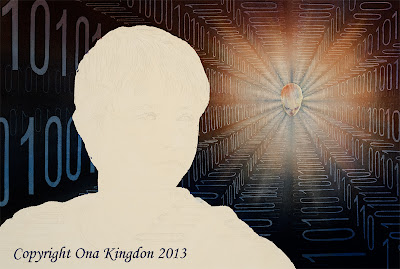 My subject for this painting will be my son Alex. I just couldn't resist the reference I am using because he looks focused and thoughtful but in a distant 'coded' way. I wanted to develop this idea further and use the background to help me do so, so I came up with the idea of using binary code.

Adolescence marks the beginning of the development of a more complex thinking processes. This shift rarely happens smoothly though... at times it is almost as if teenagers are thinking in an alien or 'coded' language... you wonder where thoughts are coming from and what they really mean... if indeed you understand them at all.  I'm sure I am not the only one that has experienced this.

So why binary code??? Alex  is really into computer sciences and there has been many a talk between him and his dad about binary code over the dinner table of an evening. I am fairly computer savvy on a basic level but often this more technical conversation is beyond me.  I thought this would be a great parallel to use... the rush of what seems to one person like a logical sequence of thoughts or events but to others who do not have the ability to fully understand the code  we are left wondering what they are thinking and why.

I am looking forward to bringing the portrait section of this painting to life over the next few weeks.

Ona
Posted by Ona Kingdon at 1:19 PM 5 comments: Links to this post
Email ThisBlogThis!Share to TwitterShare to FacebookShare to Pinterest

I'm really happy to let you know that 'Baby on Board' has been accepted into the NWWS 73rd Annual International Open Exhibition. Thank you to Mark Mehaffey the Juror.

Ona
Posted by Ona Kingdon at 7:21 AM 5 comments: Links to this post
Email ThisBlogThis!Share to TwitterShare to FacebookShare to Pinterest

Over the last few days  I've  been working on a couple ofTed series miniatures.

I made the mistake of telling one of my small Teds that if he let me paint him he might become famous and hang in somebodies home one day or maybe even a gallery. Well, as you can imagine Ted was very excited about this.  I think that maybe I should have explained that I meant the painting of him would be hung in a frame, not him. Don't you? 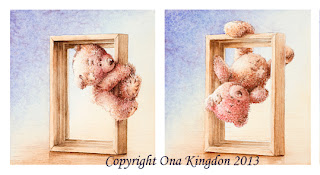 Just for fun...Can you think of a Ted name for each individual painting? Let me know your ideas because the best few will receive a Ted card in the mail :)

Its been a good day full of great news which I just have to share :) 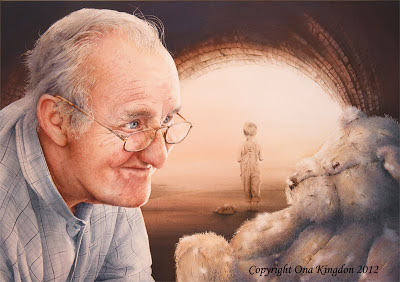 'Bookworm Breakfast' has been accepted into the Transparent Watercolor Society of America Exhibition. 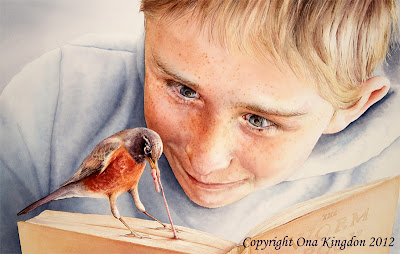 and the painting now is on its way to its new home :) What a great 24 hours!

All paintings, drawings and photographs are the copyright of Ona Kingdon. Please respect this copyright and do not use or reproduce any image or use the idea for a painting, photograph or digital manipulation of your own without seeking permission first. 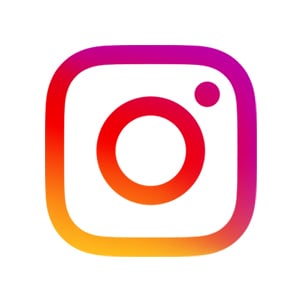 Promote Your Page Too

Showcased on Grandmasters of Fine Art